A subreddit for the Total War strategy game series, made by Creative Assembly. Discussions, strategies, stories, crude cave-drawings, and more for Medieval 2, Empire, Shogun 2, Rome 2, Attila, Thrones of Britannia, Warhammer, Three Kingdoms and others. Buy Total War: Warhammer - Norsca cheaper on Instant Gaming, the place to buy your games at the best price with immediate delivery! Total War Warhammer Dark Gods Edition. 2018 -61% $14.48 Warhammer 40,000: Gladius - Relics of War. 2018 -71% $12.35 Warhammer. Total War: WARHAMMER - Norsca DLC (PC) - Steam Key - GLOBAL Can activate in: United States Check country restrictions. In the far north, between the Chaos Wastes and the Sea of Claws, lies Norsca. A barren, inhospitable peninsula in the far north of the Old World, it is home to ferocious tribes of warriors, hardened by the relentless bli. The Dark Gods of the Warhammer universe would be very pleased if you could hunt down some of the most dangerous creatures of the Old World. In the latest Norsca DLC for Total War: Warhammer, you will get the chance to slay down eight of the new monsters.

Creative Assembly has gotten steadily better at designing campaign factions for Total War: Warhammer since launch, and Norsca continues in this tradition. With a great looking, fun, and diverse roster, they’re one of the most exciting armies to control on the battlefield. On the campaign map, they’re not quite as different and fresh feeling as, say, the Wood Elves, but still have a fairly hefty chunk of unique stuff to try.

Norsca is a playable faction in Total War: Warhammer. They were announced on June 18, 2017 and will be introduced as a Race Pack for those who pre-order Total War: Warhammer II, who purchase it during the first week of sale, or who purchase the Serpent God edition. 1 Background 2 Lords 3 Race Pack 4 Gallery 5 Videos The Norsca are named after the barren, inhospitable peninsula to the north of. 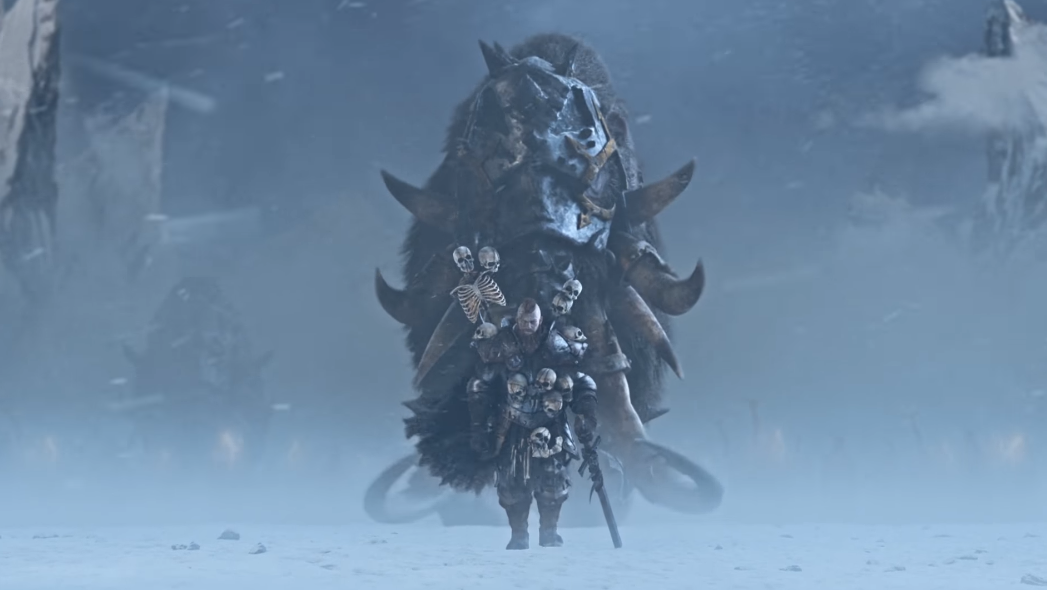 The reaving northerners have easily one of my favorite rosters across all factions, reveling unabashedly in the stereotypes of the savage barbarian army with over-the-top, glorious flair. Even units like the standard, axe-wielding Marauders they share with the Warriors of Chaos have been tweaked, gaining a Rage ability that causes them to fight harder and better the longer they are stuck in a melee engagement without their morale wavering. The lightly-armored Berserkers are fragile but extremely deadly against infantry and immune to fear, while Skin Wolves (basically werewolves clad in the skin of their former, human selves) offer a compelling cavalry replacement with tons of mobility, constant health regeneration, bonus damage vs large, and enough punch to demolish all but the heaviest infantry and cavalry.

And that doesn’t even begin to delve into some of their even less conventional options. The reptilian Fimir are monstrous infantry with a “From the Mist” passive that makes them highly resistant to missile fire - a great counter to those pesky Asrai who want to plant ugly trees all over your lovely wasteland. And of course, the centerpieces are the massive War Mammoths, capable of ludicrously deadly charges and able to be equipped with a Chaos Warshrine that boosts your morale. Anyone who was worried Norsca wouldn’t have a distinct enough identity from Warriors of Chaos can discard their concerns at the door.

The roster does feel a bit underwhelming when it comes to legendary lords, however. Throgg the Troll King is a fantastic, tanky beast of a leader. But the faction’s golden boy (and one of my favorite characters in all of Warhammer lore), Wulfrik the Wanderer, feels perpetually underpowered. Even at high level, he simply doesn’t stack up well against other melee heroes like Karl Franz or Grimgor. His Seafang ability rarely does enough damage to have a noticeable impact on the battle. And his signature trick, Hunter of Champions, allows him to gain a temporary edge against a lord or hero of his choice in one-on-one combat… but even this often wasn’t enough to tip the balance of a duel in my favor. I hope he sees some buffs in upcoming patches, because as of now, he simply doesn’t feel like he’ll ever be competitive in multiplayer.

Norsca’s chief campaign mechanic involves razing settlements in the name of one of the four Chaos gods, gaining favor with that god but displeasing the other three. They’re not a horde faction like Warriors of Chaos, but are limited to occupying settlements in Norsca, anywhere with a port, and faction capitals. The rest may only be laid to waste. Each god gives you stacking blessings as you curry more favor - weapon damage for Khorne, research rate for Tzeentch, etc. - and while it is possible to keep your favor up with two or three gods at a time if you’re not in a hurry, you will ultimately have to side with one alone to finish the campaign.

Unlocking level 3 favor with any god triggers the endgame, which will first require you to defeat a powerful champion from each of the three gods you did not side with. Finally, Archaon and the Warriors of Chaos show up (they don’t even appear on the campaign map before this point - and I’m unsure how this will work in multiplayer if one player is Norsca and the other is Warriors). You are given a choice to join their invasion of the Old World… or fight against them and claim the title of Everchosen for yourself. I took the latter path, naturally, which led me into a massive, bloody Chaos civil war that lasted over a dozen turns and almost saw me wiped completely off the map. Sadly, Norsca doesn’t get a scripted set piece battle to finish the campaign off like Wood Elves and Beastmen, or even an ending cinematic. Once Archaon was defeated, I swept across the Empire and was taken unceremoniously to the victory screen when their last settlement fell.

Norsca is also peculiar in that they don’t have chapter sub-objectives - but this is replaced by the Monstrous Arcanum, a book of special quests to hunt down the Old World’s mightiest monsters and reap their rewards. These battles were epic in presentation and challenging even for an experienced army. They really feel kind of like playing an MMO raid boss encounter with a Total War army, which I found very enjoyable and would love to see more of in the future. And the rewards are worth it. Some beasts net you a very powerful equippable item, while slaying others lets you recruit a similarly-themed special regiment that tends to be far more powerful than the basic version.

I had a blast with the Norsca campaign, and they have quickly risen to become my favorite roster (even over my beloved Wood Elves) to play in skirmish and multiplayer. Of their two legendary lords, only Throgg feels like he can match up to some of the beefier leaders of the other factions, and I felt the campaign ended suddenly and with an anticlimactic lack of fanfare after all of the epic events leading up to that final turn. Still, I can’t help but be impressed by the art, the mechanics, and the overall savage attitude packed into this DLC. It’s an easy one to recommend.

A fun and enjoyable faction undercut by a rushed campaign. 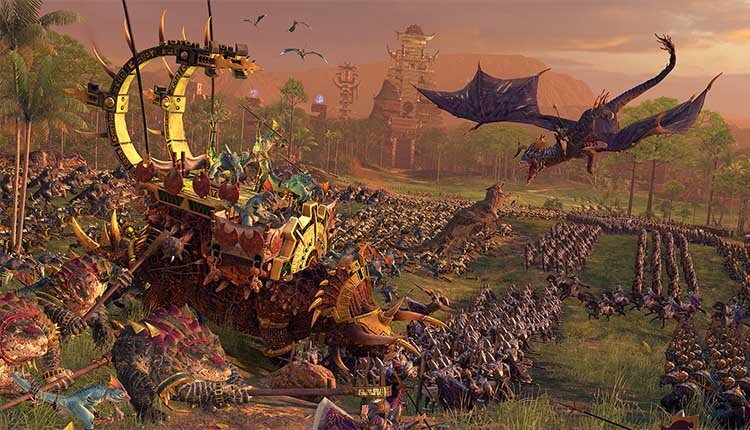 Norscan Giant is a Norsca melee monster unit introduced in Total War: Warhammer. He follows those who wage war for the Dark Gods – their killing fields are his feeding grounds.

Giants are monstrous humanoids with a prodigious appetite for violence. They are single-minded engines of destruction most often encountered in the far north of the world, being fond of the cold, rocky climes. Many find themselves lumbering alongside the warring Northman tribes, either for their fill of fresh meat and strong alcohol, or simply for the promise of slaughter and battle. Many Giants of the north are instinctively drawn to the raiding men who seek to bear the favour of the Dark Gods – perhaps because the corpses are always thick on the ground in the company of such individuals. Smashing into enemy ranks to kill and feed, they have no real concept of obeying orders but, rather importantly, do have the intelligence to recognise friend from foe.

Deponia: The Complete Journey features over 4 hours of Developer's Commentary, a Deponia world map that allows for selection of each chapter of the game, a. Deponia collection.

Use a Mammoth instead, giants need their own recruitment building at tier V. Mammoths are already available at tier IV. Mammoths have a better AoE attack too, able to shred enemy formation with ease.

In defence of the Giant, they are a more well rounded armour-piercing unit. While they have the anti-infantry tag, they do not have an actual bonus vs. infantry, which mammoths do in spades. The Giant has almost double the melee attack because they do not have a bonus vs. X to boost themselves. They also have a decent amount more armour-piercing. Still, the mammoth is generally better because of their superior speed and large bonus vs. infantry.