#hunterandbeast #nakai #warhammer2 The jungle-continent of Lustria lies west across the Great Ocean. The first men to land upon these shores, ransacked an an. The next DLC pack for Total War: Warhammer II is called The Hunter and The Beast and introduces two new lords for the Empire and Lizardmen factions. Both be used in the Eye of the Vortex campaign and Mortal Empires campaigns.

Did you know that the Empire is Total War: Warhammer’s most popular race? Seriously. It must be something to do with the fact that the world of Warhammer Fantasy is filled with countless horrifying creatures, and the idea of a race of humans somehow holding the line against that is quite appealing. Whether the undead, dragons, orcs, rats, or in this case, Lizardmen, fighting these monsters is just another day in the life (though probably the last) for an Empire soldier. So Total War: Warhammer 2’s new lord pack, The Hunter and the Beast, which brings the Empire into the New World, will no doubt be a popular one.

Facing off at the heart of this lord-pack are the Huntsmarshal, Markus Wulfhart, and crocodilian beastie-boy, Nakai the Wanderer. Essentially Markus looks to further the Empires’ interests in Lustria, garnering glory, looting those lizard trinkets, and just generally sticking an arrow into any dinosaur that crosses his path. Tenderfoot tactics deluxe edition download free. But Nakai, the ancient Lizardmen guardian, doesn’t take too kindly to these invaders plundering their temple cities, so sets about driving these warm-bloods back into the ocean.

Rumble in the Jungle

The two campaigns mainly centre around four legendary hunters — Wulfhart seeks them for their aid in the campaigns’ final battle, whereas Nakai just wants to kill them for insulting the jungle. In Wulfhart’s campaign, these hunters manifest themselves in little quest chains, all told from the perspective of Wulfhart’s diary entries, by far the best feature in the DLC for me. Each hero’s quest relates primarily to a different area or faction, whether that’s Van Hel’s war against the Vampire Coast, or Kalara’s vendetta against a gigantic monster. This allows them to effectively split your campaign expansion into smaller narrative chapters — a very cool piece of roleplay. What’s even cooler is that the hunters are real Warhammer Fantasy characters for which the DLC expands on - seriously go look them up! These quest chains do so much in adding mystery to the storied continent of Lustria, where previously it had been somewhat bland.

By comparison, Nakai’s faction, the Spirit of the Jungle, engage with these hunters in a far less interesting way, basically finding them on the map and slamming them into bloody ruin with his crocodile fists. Nakai’s campaign is based more around starting small and building up, all the while under the unsuspecting noses of the colonists. Nakai has a little army and a somewhat bad economy, but he can gain powerful abilities, plus you’d be amazed what a small band of angry giant crocodiles can accomplish when they put their minds to it. Nakai is, pardon the expression, a beast on the battlefield — I saw him rack up 40 kills in maybe 15 seconds. If you consider that Nakai also now has Razordons (a spiky Salamander variant) legendary Croxigors (power-fist crocodiles) and the Dread Saurian (a monster which brings the phrase, “There’s always a bigger dinosaur” to mind), you’ll see they have easily enough to turn the tide.

The Huntsmarshal’s Expedition also has a rocky start, made worse by the interplay between the Imperial Supply and Hostility mechanics. Early on in the game you don’t have access to many units, or the buildings to recruit them, instead relying on reinforcements in the form of Imperial Supplies, which arrive periodically every so-many turns. Each time you occupy or sack a settlement belonging to a Lustrian faction, Hostility will increase, giving you debuffs, but so too will the number of turns until those precious supplies arrive. When hostility reaches full, supplies will arrive immediately, but an army of unbreakable Lizardmen will also spawn for a little payback. It’s a great mechanic which essentially gates your expansion, as every five settlements you take, you’ve got to beat a retreat and defend yourself. Eventually another big scary Lizard will show up, but I won’t spoil that. This is all to gain prestige, which will unlock better supplies and the buildings you need to construct units — when it reaches maximum, the final battle will be upon you.

On top of the war wagons, the archers, the huntsmen (better archers) and the new lord type, Huntsmaster General, there’s a hell of a lot to love in this campaign. Nakai’s campaign, while fun, is arguably less strong — The Spirit of the Jungle is a horde faction who can gift settlements to his vassal, The Defenders of the Great Plan, dedicating them to a Lizardmen god to gain army abilities or buffs to unit types. But this is essentially where the interest ends — Nakai’s campaign focuses more around the enjoyment of watching dinosaurs go to town on a bunch of tiny humans, an objective it accomplishes admirably.

At its heart The Hunter and the Beast is about creating that feeling so many of us play the Empire for — of holding the line and defeating some of the most terrifying monsters this world has to throw at you. Though from the opposite side of the scale it is also about inhabiting those same monsters and smashing your foes into dust.

This head-to-head pack is a vast improvement over The Prophet and the Warlock, because this DLC actually gives the lords something tangible to fight over, as well as a climactic final battle to work towards. It also revives stories from Warhammer Fantasy lore, and reinvents a game one race for game two, which effectively makes possible a whole host of future cross-game content packs.

For my money, The Hunter and the Beast is hands-down the best lord pack we’ve had for Total War: Warhammer 2. 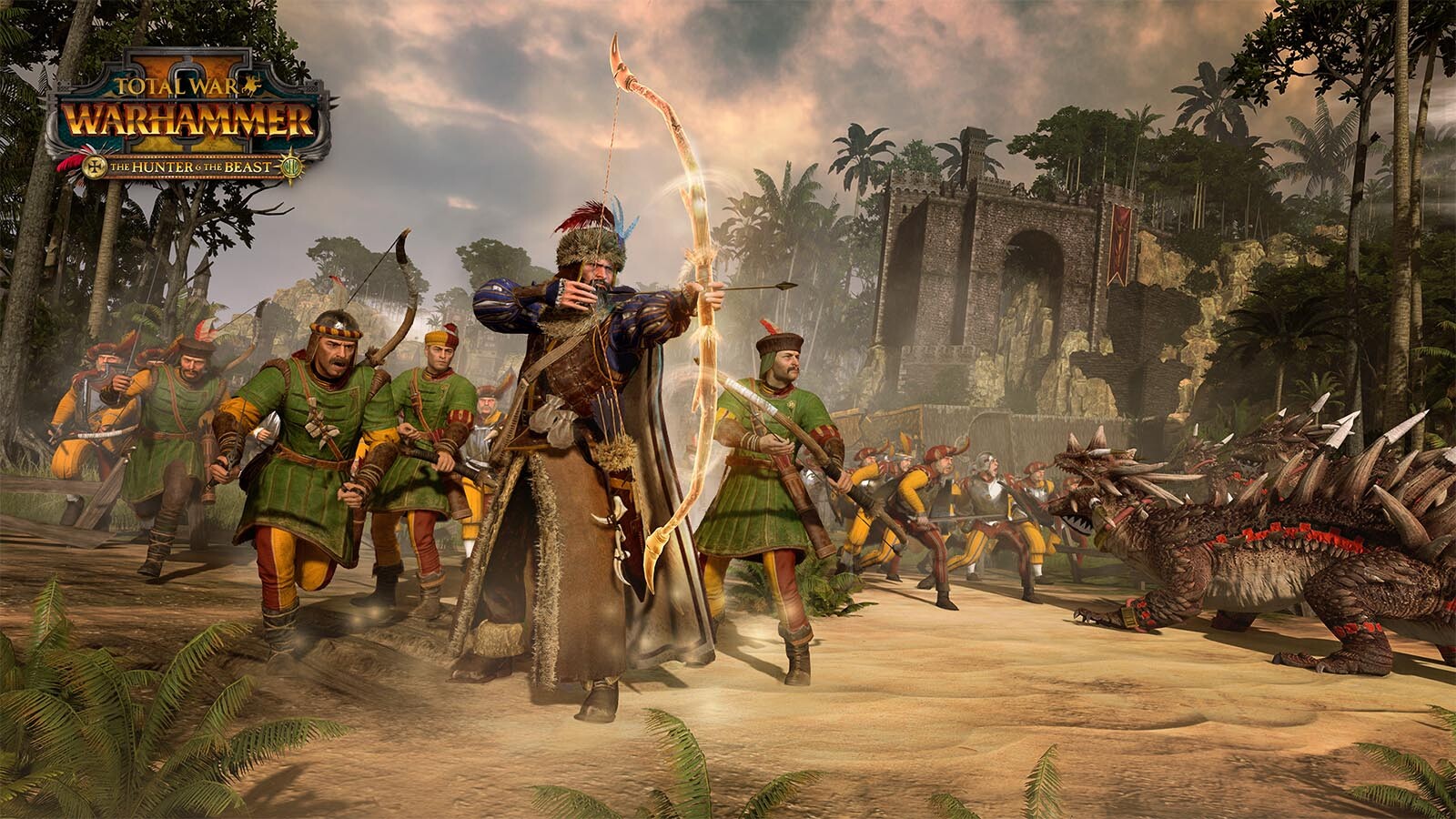