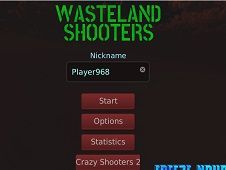 This game Toon Shooters 2 can be played directly in your browser, free of charge. This game has been played 5.4k times and has received a rating of 5.00 / 5 with 3 votes. and was built with WEBGL technology to work fast in most browsers. To have a more enjoyable experience this game can be played in fullscreen mode also. If you enjoy this Toon Shooters 2 game, make sure to check out our other exciting games.