The Fall of the Dungeon Guardians Enhanced Edition. The Fall of the Dungeon Guardians is a RPG Dungeon Crawler amusement, in First Person View, motivated by works of art like Dungeon Master™ and Might and Magic®, yet highlighting a cutting edge strategic battle in light of the triptych “tank/harm merchant/healer” instrument combined with the danger and aggro framework and a functioning interruption. 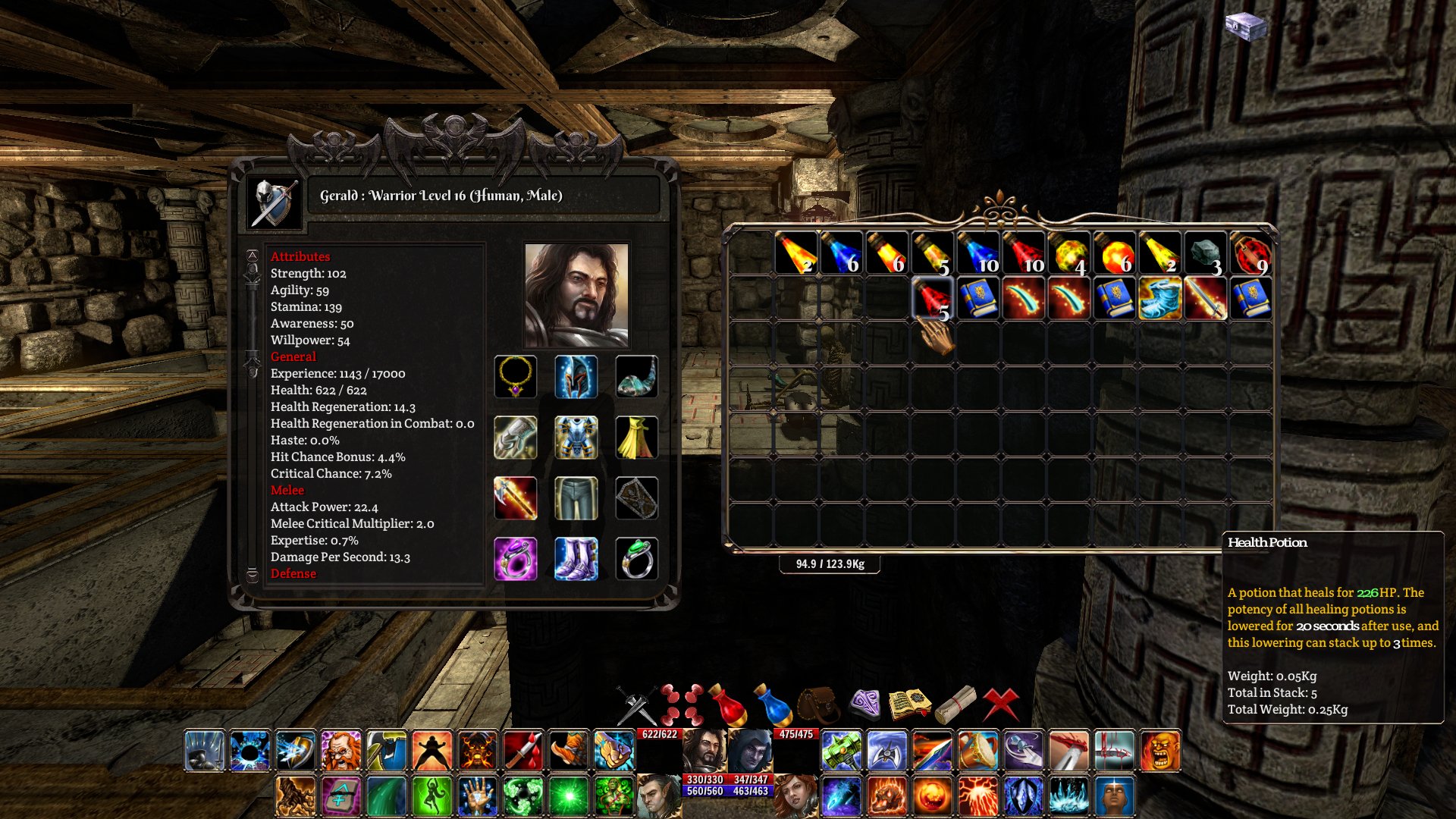 New Features :
- Engine : updated to Unity 5.6.4p4
- GUI : added 'Critical Chance' in the tooltip of the damage numbers (when there's a Critical roll)
- GUI : when you don't have any selected target, you can see all enemy frames in cell on front of your Party by adding this line in Dungeon.ini, under [Gui] :

- Inventory : added a warning the 1st time your inventory gets overweight
- AI : now Evil Watchers, Chaos Watchers & a couple other enemies have homing projectiles, which means you can't actively dodge them anymore ; this will make more clear that the Evil Watchers are there to test your healing capability (and your aggro rotation in harder difficulty levels) and not your dodging reflexes, and thus you'll be more ready for the tough Bosses
Changes :
- Talent : raised Necromancer Last Breath Haste bonus from 2 to 4%
- Talents : Necromancer's Angry Spirit now also raises Hit Chance by 3/6/9%
- Talent : raised by 20% the bonus of Ranger's Focused Hunting
- Talents : Necromancer's Talent Shadow Army tuned down to 10/20% damage reduction over 9s from 15/30% over 8s.
- Talent : Druid's Dance of Star heals over 12s instead of 8s
- Abilities : now taunts abilities can't miss
- Ability : Threat Transfer abilities now work in all situations like their tooltip says
- Abilities : stacked DoT abilities without final effect now last a bit after their last tick if it's needed to reach their total time, so it gives more time to add stacks
- Abilities : revamped Man At Arms' Warcry as stacking 3 of them was way too powerful ; so it has been nerfed to 25s duration with a 2-min CD from 45s/3-min (as a side effect, this also makes the talent Drums of Doom a bit more interesting), and switched Deadly Assault with Overwhelming Blow in the Execution Talent and in the Ability list, so it won't become OP when used during Warcry
- Combat : Buffed a bit the Hit & Expertise enchantments, and slightly raised the difficulty to compensate
- Combat : raised a bit the difficulty in the last third of the game, so it'll be closer to the beginning of the game instead of getting a bit easier
- Localization : Italian translation fixed & enhanced
- Localization : changed 2 attribute names in Spanish to make them more understandable
- Localization : added a couple missing sentences in German
- Localization : French proof-read by Alexandre 'All_zebest' Mangin
- Fx : projectiles don't go through walls anymore
- Boss : Increased Dark Decay Damage for difficulties above Strategist
- Boss : Raised damage of Boss 6's Light Avatar's Sniper Arrow by ~200% and Shadow Avatar's Rain of Arrow by 15%
- Boss : Raised damage of Boss 10's Sniper Arrow by ~33% 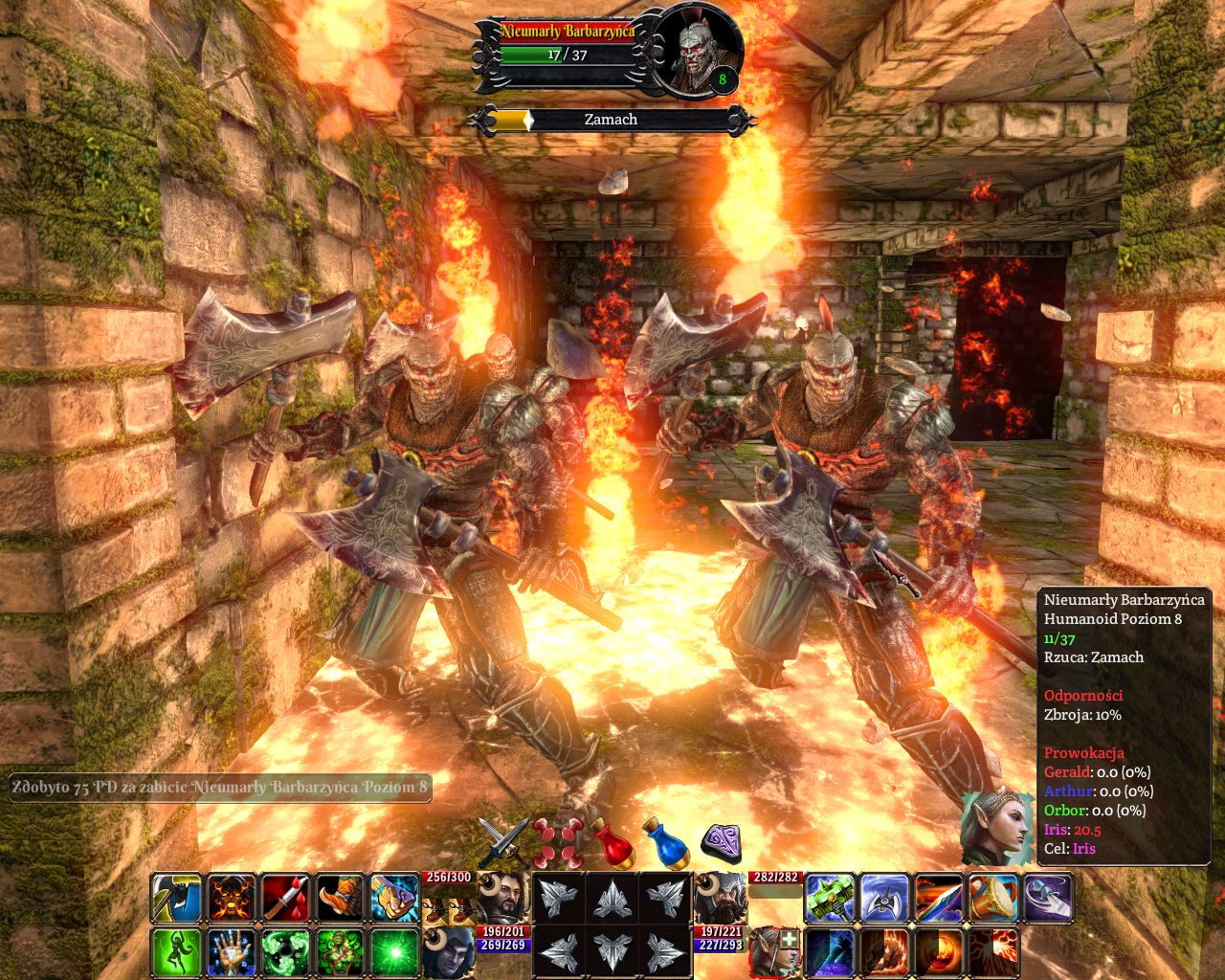 - Boss : tuned a bit the Boss # so it'll be a bit harder to just out dps her
- Boss : raised melee damage all of the Bosses by ~10-15%, as since the 3-Level fix of Build 59 on last November, they were not strong enough (because their hit-table was actually calculated with their opponent Level instead of their own Level minus 3, which is fixed now)
- Boss : Seriously buffed damage of Boss 18, and a bit of Bosses 14 & 15
- Boss : Final Boss damage significantly raised and raised a bit damage of Boss 16
- Class : lowered global damage of the Rogue by 5% to compensate the extra damage produced by the bug fixed below
- Enemies : Skeletons have now 0% resistance against Holy instead of 5% (which is hidden from the GUI), and the Skeleton Footman and Warlord have now some armor
- GUI : the red/purple/pink outline is now a bit more visible
- GUI : 4-sword mouse over tool is now rotating even when the game is paused
- GUI : the little Purple ball on character portraits is now shown before hit while casting (this shows when the hit occurs during the cast)

The Fall Of The Dungeon Guardians Enhanced Edition Walkthrough 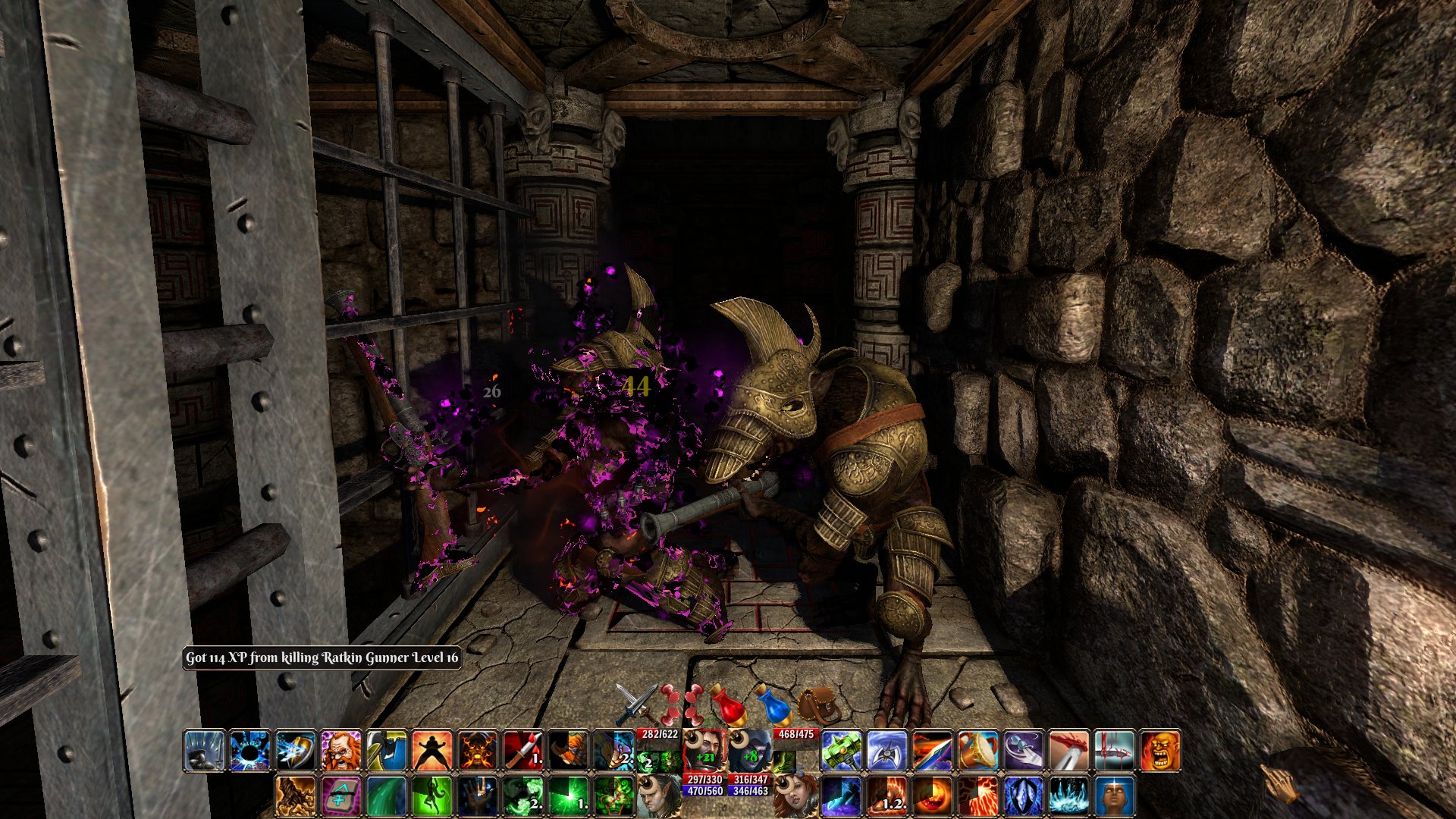 Bug fixes :
- Combat : a couple of projectile based abilities were doing physical damage instead of magical damage
- Controls : Mouselook could jump a bit around when used during pause
- Controls : right-clicking the abilities (to dequeue them) with the game paused could make the camera jumps a bit
- Ability : Duelist's Sweeping Blow was applying full damage to the enemies surrounding its main target, instead of half-damage like specified in its tooltip
- Abilities : healing & damage of respectively Necro's Soul Sucking and Eat my Flesh weren't scaling up when their damage & healing were hitting critically

The Fall Of The Dungeon Guardians Enhanced Edition Trainer 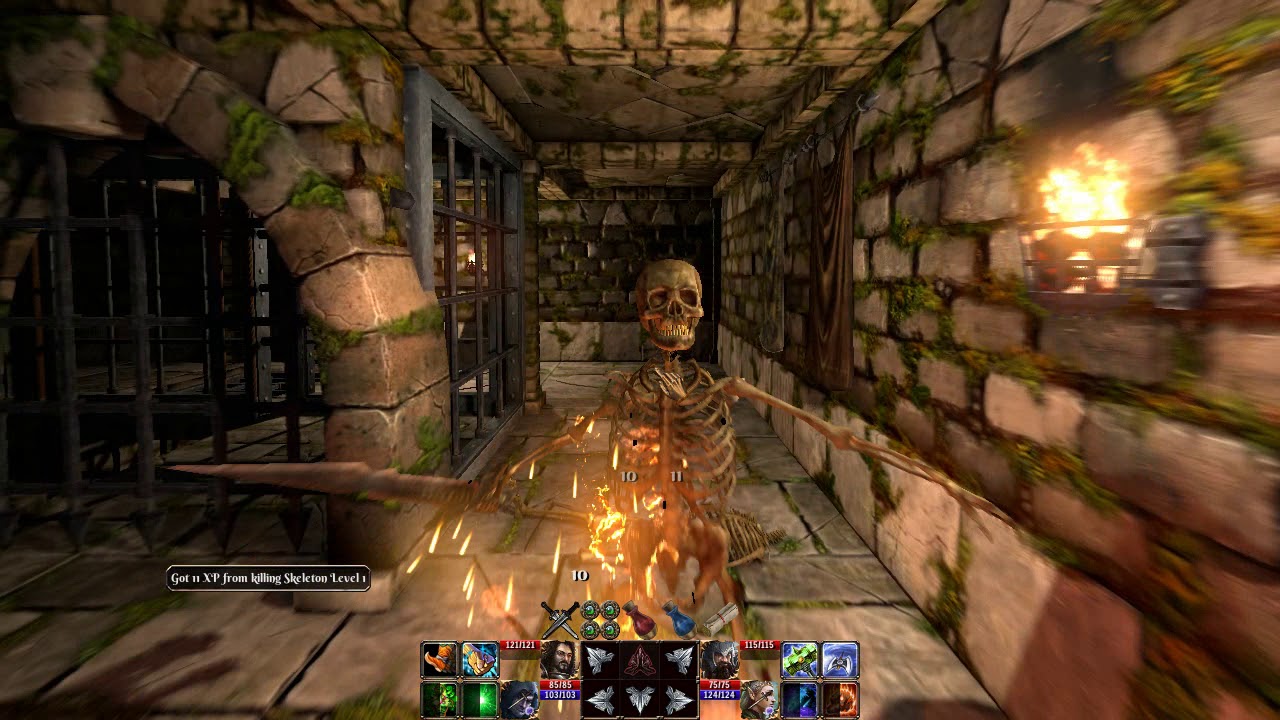 - Combat : Dual Wielding Weapons were inverted between the main-hand attacks & the off-hand attacks
- Combat : all Area of Effect (AoE) abilities were using Spell Critical Damage multiplier, even for Melee & Ranged abilities
- Combat : fixed a queue issue that could arise when your members' target was dying and you were not assigning instantly a new target
- Combat : DoT not affected by Haste weren't doing any damage on their last tick
- Combat : Auto-attack CD is now shortened by Haste, so if a Character is only auto-attacking, he won't pause anymore between 2 auto-attacks when having Haste
- Combat : Talents triggering only on Direct Hit and not DoT weren't working
- Combat : enemy sub-abilities were crashing (bug introduced in SubBuild 2017.11.5)
- Combat : queue wasn't emptied when knocked down and thus it was restored when waking up
- Combat : queue mixing friendly & attack spells wasn't correctly transferred to a new target on current target death
- Talent : Necromancer's Angry Spirit was also raising shadow based healing abilities, instead of only the damaging abilities
- Talent : Man At Arm's Lust for Blood wasn't working
- Talent : changed Arcanist's Arcane Fusion triggering chance from 50/60/70 to 40/70/100 and raised its damage by 8%
- Talent : refunded a talent point from a talent having several different effects could still get a part of its associated bonus applied once clicked on 'Done'
- Talents : DOT weren't getting most generic bonuses on damage/healing, critical chance & critical damage (eg: +2% fire damage) ; they were getting specific bonuses though (eg: +10% damage for a designated ability)
- Talents : fixed a bunch of talents triggering when getting hit and that were triggering on DoT since yesterday patch, while they shouldn't
- Talents : talents boosting total HP & Mana could create inconsistent results when removing & re-equipping gear
- Talent : Man At Arms' One-Hand Specialization was also increasing 2H-weapon damage
- Talents : Bonuses on DoT Critical Chance weren't applied (only base Chance could be activated)
- Talents : abilities called by talents were always using Spell Critical Multiplier for their Critical Strikes, even if the abilities were melee or ranged
- Talents : Threat Reduction & Augmentation Talents weren't working (Paladin's Threat Reduction Ability was working though)

- Talents : Paladin's heal on crit talent was disrupting the functioning of AoE abilities when they were getting critical strikes
- Talents : critical chance bonuses on DoT were applied twice
- Talent : Arcanist's Arcane Fusion was triggering on Arcane Rupture Tick instead of only when it was cast
- Talent : Elementalist's Mana Refund wasn't working for Ice Blast when Flash Freezing was activated
- Rendering : Dps Graph Lines don't disappear anymore on window resizing
- GUI : fixed a little discrepancy that could happen between actual HP & Mana maximum and the HP & Mana bonuses reported in the Character Sheet
- GUI : fixed height of popping damage numbers against some enemies
- Boss : Bosses were always seen as 3 Levels under your Party Members instead of 3 Levels above for your attacks (except for Direct Hit Spells), and of their designated level for their own attacks ; I fixed that and did a big retuning of the Boss fights, see here for more info or if you notice too big changes in the Boss strength => http://steamcommunity.com/app/409450/di .. 169413783/
- Boss : damage mitigation against and for Boss was done with the Boss Level instead of the Party Member +/- 3 Levels
- Localization : fixed a couple of typos in English
- Fx : Level Boss particle effects was making the whole screen black and killed the framerate for a few seconds
- Options : Low Enemy Density could lead to a little XP issue with NPCs
- AI : enemies were not aiming correctly if your Party was moving when they were firing projectiles

The Fall Of The Dungeon Guardians - Enhanced Edition 攻略

Free Download The Fall of the Dungeon Guardians Enhanced Edition PC Game – You’re a newly employed guard of a prison deep inside a dungeon. The night of your arrival, strange things happen and when you wake up in the morning, all prisoners have escaped amidst chaos. The warden wisely decides to leave the dungeon as quickly as possible …

The Fall of the Dungeon Guardians is an RPG Dungeon Crawler game, in First Person View, inspired by classics like Dungeon Master and Might & Magic®, but featuring a modern tactical combat based on the triptych “tank/damage dealer/healer” mechanism coupled with the threat & aggro system and an active pause.

You’re a newly employed guard of a prison deep inside a dungeon. The night of your arrival, strange things happen and when you wake up in the morning, all prisoners have escaped amidst chaos. The warden wisely decides to leave the dungeon as quickly as possible, while tasking you to run after the escaping prisoners. You then assemble your team and venture into the mysterious dungeon.

The Fall Of The Dungeon Guardians - Enhanced Edition Pc

Note: Links are interchangeable, if you find any dead links please report them to “HERE“

The Fall Of The Dungeon Guardians - Enhanced Edition Cheats

General Notes:
• Block the game’s exe in your firewall to prevent the game from trying to go online .
• If you install games to your systemdrive, it may be necessary to run this game with admin privileges instead