Since its launch in 2014 The Elder Scrolls Online has seen many changes and expansions. For the past several years it has received a major expansion, opening up a familiar section of Tamriel to players who are familiar with the offline games. Typically, the events in The Elder Scrolls Online occur in a different time than the single player game where these regions were explored, allowing the developers freedom to create a re-imagined version of the familiar area to make a new experience for players, blending the familiar with many new twists. This year’s expansion, Greymoor, opens up the the most popular tourist destination in Tamriel: Skyrim. And like previous installments, players who have explored Skyrim across its many incarnations will find the region not exactly how they remember it.

The Elder Scrolls Online: Greymoor takes place in Western Skyrim over 900 years before the events of The Elder Scrolls V: Skyrim. Some areas of Western Skyrim from several centuries ago look a bit different from the arctic homeland of the Nords most of us have previous experience exploring while a few others somehow appear to be untouched by the passage of time. The familiar depths of Blackreach has been greatly expanded upon and plays heavily into the yearlong The Dark Heart of Skyrim event.

While the Skyrim of several centuries ago is different from the one most of us are familiar with, the arrival in Greymoor is a callback to that wagon ride that ended disastrously with some dragon invention. It’s a nice way to start out the thirty hour campaign, where there’s just enough of a hint of familiarity in this return to Skyrim but showcases that the location is the main point of commonality between the two distinct stories.

The main plot of Greymoor involves an army of vampires who are up to no good, as vampires typically are in RPGs. There are cyclonic storms know as Harrowstorms that appear as timed events throughout western Skyrim. These Harrowstorms turn the inhabitants of Skyrim into unpredictable and dangerous, mindless creatures so the heroic thing to do is to seek out and destroy the cause of such occurrences. From a human standpoint, these sounds like terrible, terrible things, but from a gamer standpoint these are prime opportunities to team up with some friends and rack up a lot of experience since the threat level of these events can yield great rewards for people concerned with level grinding. The story seems in some ways like an homage to the Dawnguard. As stated earlier the plot does revolve around an ancient vampire lord and like Dawnguard the player has a vampiric companion who accompanies them on several quests. The story of Greymoor unfolds in a way that is interesting but does feel predictable and formulaic in comparison to other expansions for the The Elder Scrolls Online.

In addition to the main story there’s some new content added to the mix to give players plenty of activities to complete in Greymoor. This content includes two public dungeons that are good for group grinding sessions, six dungeons for solo completion called delves, hidden skill shards, six world bosses and a trial raid for high level characters.

The other new feature that has been discussed since launch was the Antiquities system. This system involves a minigame where the player narrows down potential dig sites to the smallest number of possible locations before going there to physically try to unearth the item with a shovel or suitable substitute before reaching the point of exhaustion. Blasphemous dlc ost. This begins with a Scrying minigame where players match shapes to nodes on a treasure map. After they narrow down the locations they need to go unearth it, which is done by finding the glowing patches of dirt and beginning an excavation. This isn’t a huge addition to the experience, but does add a nice break from the typical MMO stuff and can lead to some interesting treasure.

Visually the new areas added in Greymoor look great and show how much the MMO’s graphics have evolved since 2014. The snow-covered forests of Western Skyrim look as impressive as they did when we first entered Skyrim almost a decade ago, though there are significantly less dragons. Blackreach has been greatly expanded, having evolved into a grand gothic setting for the battle against the vampire lord. The release of Greymoor also sees The Elder Scrolls Online making its Stadia debut. One of the best things about playing The Elder Scrolls Online on Stadia is the user can link their account to Stadia, so all the progress made with my character in PC was still there on the Stadia version. A problem with Stadia on the Google Pixel is the on screen text is usually too small but this wasn’t an issue with Greymoor. The performance of this title on Stadia was surprisingly smooth so even though by now most players have their preferred format Stadia is a viable platform for The Elder Scrolls Online. The same issues with graphic quality settings and framerate compared to the user’s network speed play a factor but things went smoothly during the review. 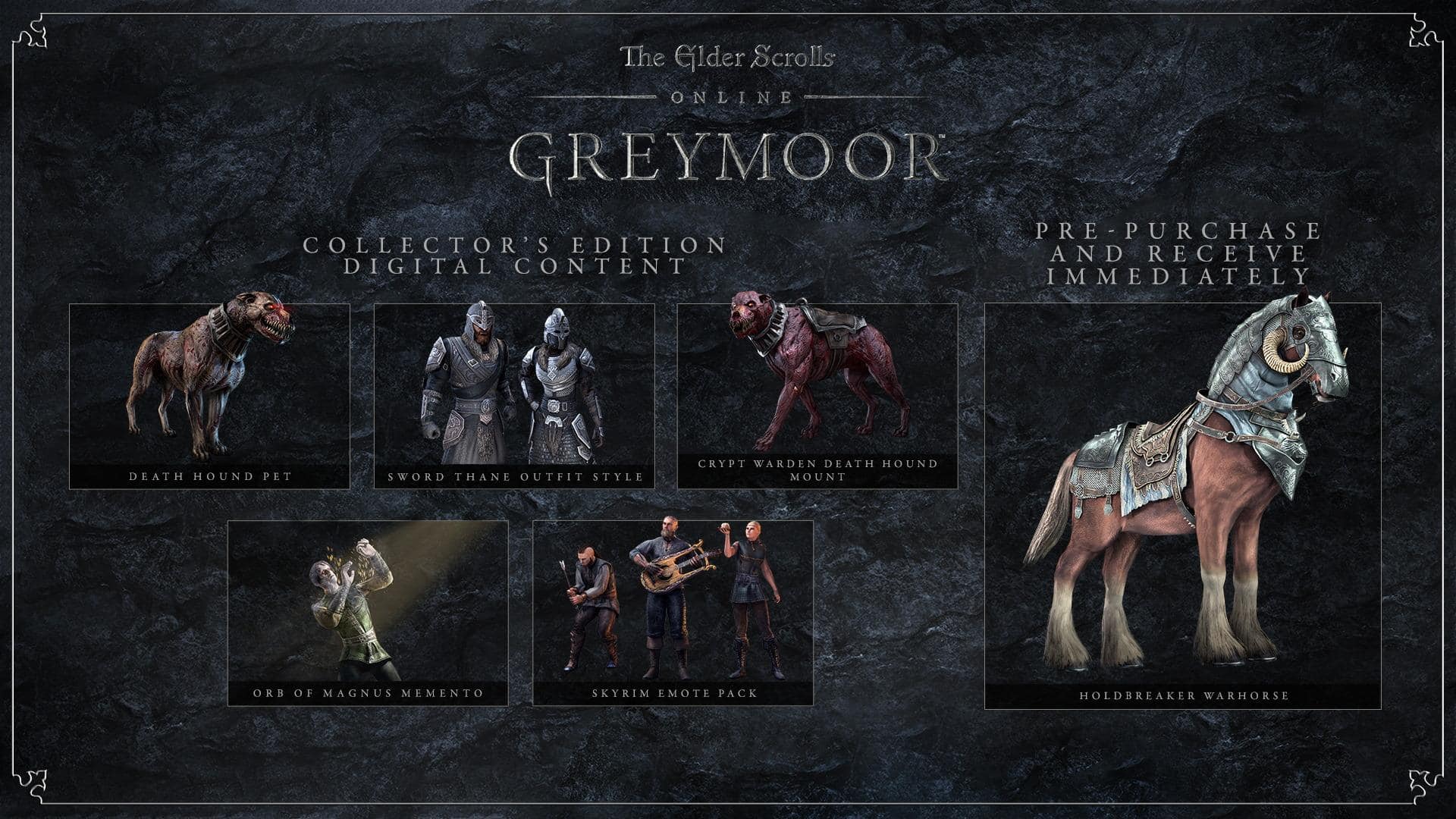 The Elder Scrolls Online: Greymoor introduces plenty of new content and an interesting main story campaign. The Antiquities system does add a minigame that helps break up the gameplay and offers a new way to treasure hunt. For the most part, Greymoor is more of what we have come to expect with the annual expansion to The Elder Scrolls Online. This isn’t a bad thing, but one must have their expectations tempered to realistic levels. This expansion is about the same level of enhancements that we saw with Summerset and Elsweyr, and for people hungry for Skyrim nostalgia there’s some here, but the experience is clearly in the vein of the MMO and not the single player adventure. Greymoor is a good starting point for newcomers and a welcome expansion to veteran players, while the added Stadia compatibility also offers a nice portability option.