A bit of blathering introduction is in order.

Star Wars: Jedi Knight: Dark Forces II is one of my all-time favorite games, if you can trust the Top 10 list I contributed to GameCola’s Issue 1-1 Tribute oh so long ago. I love the first-person carnage with Imperial Repeaters and Concussion Rifles; I love the third-person carnage with lightsabers and customizable Force powers. The villains are memorable, the locations are intriguing, the challenges are challenging, and the vintage FMV cutscenes are precious. Saber combat is about as sophisticated as a fifth-grade love poem and the graphics have aged about as well as an unrefrigerated piece of meat, but even that relative simplicity has its charm. 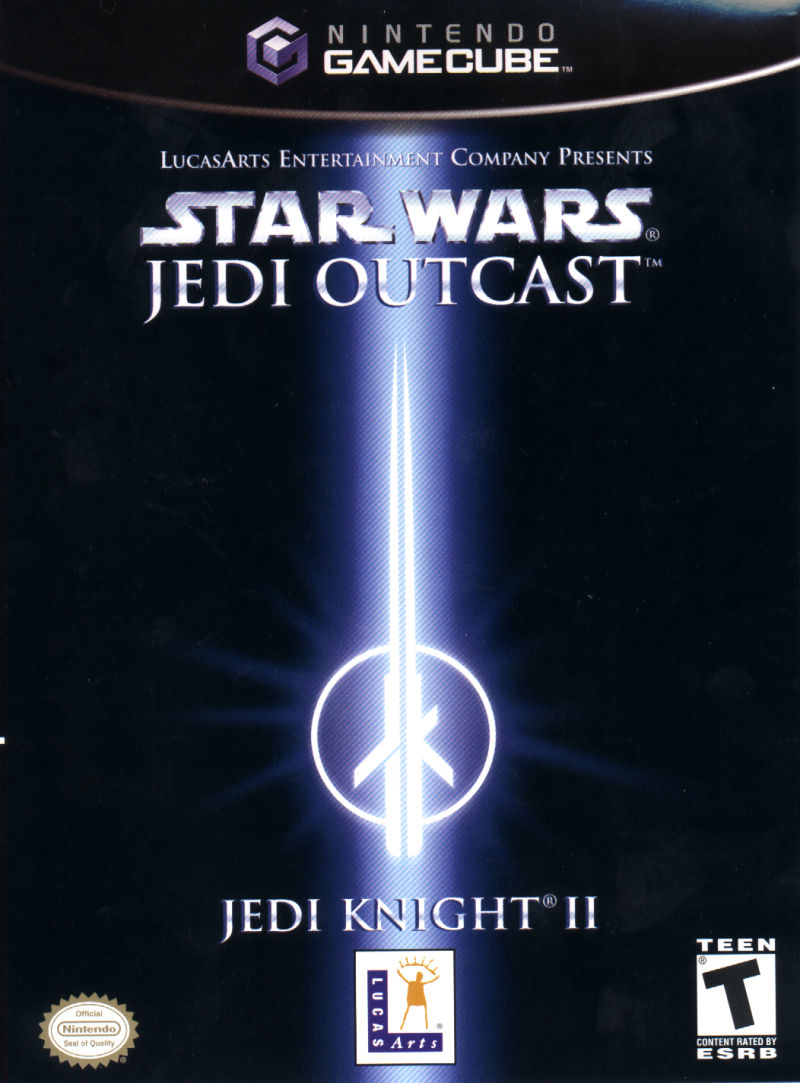 Jedi Knight‘s full-length expansion pack, Mysteries of the Sith (known to all the cool kids as MotS), gave us more weapons, more Force powers, new friends and foes, new locations, and a few interesting surprises—superior in some ways, inferior in many, but overall a worthy and satisfying successor to My Third Favorite Game Of All Time, According To That List I Made.

If a true sequel could ever hope to come near the brilliance of Jedi Knight, it would need to capture the spirit of Jedi Knight, build on the innovation of MotS, and become bigger, more modern, and more refined. Failing that, a cameo by Lando Calrissian wouldn’t hurt.

Well, you win some, you lose some.

The ensuing story is one of revenge, redemption, and reloading saved games, as lightsabers are fatal when applied liberally to your torso. While there are many reasons to play JKII, the robust and elegant lightsaber combat is, dismembered hands-down, the primary selling point. Saber attacks are coordinated with your movements, so a running slash will have a different effect from a cowardly standing swipe. You’ll eventually have access to three distinct saber combat styles called Light, Medium, and Why Can’t I Hit Anything, giving you a choice between dealing heavy damage and actually connecting with your target. Special moves, including a sneaky backwards saber thrust and a blood-rage leap slash, increase your chances of dying while trying to show off. Independent of anything else the game may offer, it’s all worth it for the lightsaber combat.

Not that, uh, Kyle gets his lightsaber back and becomes a Jedi again.

But if he did recover his Force powers, it would be a lot of fun to combine hypothetical lightsaber combat with the Force. You might, for example, choke an enemy and hold him immobile in the air, then hurl your spinning saber at him. You might also run along the side of a wall and give your foes a glowing haircut. The possibilities are…limited to these two options, mostly, but doggone it, they never get old! Oh, wait, and you can Force Push flying rockets back at the guy who launched them, and that’s tremendously awesome.

The special moves are quite stylish, and the character animations in general are fluid and realistic enough to keep you immersed in the authenticity of the game world until a dead Stormtrooper inevitably gets lodged halfway in a wall. A nice-looking wall, mind you; the textures in this game are all very Star Warsy, level architecture is appropriately complex and visually pleasing, and the character models hold up significantly better than the face-on-a-stick aesthetic of the original Jedi Knight.

Call of duty modern warfare free version. I kid because I love, but this game still looks pretty good, despite what my graphics card would lead you to believe. Pre-rendered cutscenes don’t look terribly fake, robot sentries explode with satisfying fireworks, and there’s some attention to detail in one rainy level that perpetually astounds me: the rain creates sparks as it vaporizes upon contact with your lightsaber. From the motion blur that accompanies Force Speed to the delightfully devastating disintegration animation of being hit by a disruptor rifle, the special effects and overall visuals of this game are always a joy to enjoy.

Yet, despite their cool looks, most of the weapons are only somewhat fun and useful. There’s a good mixture of weapon types, but the precision weapons are either weak or get you killed while you’re lining up a powerful shot, the rapid-fire weapons are set to Miss, and the explosives are more likely to get you blown up. There are moments throughout the game where it’s effective and outrageously fun to use one of these weapons, but it’s a liability to take on a saber-toting enemy with anything but a saber, and there are plenty of those to go around. Whether by necessity or by reluctant choice, you’ll probably spend the vast majority of your game time wielding a lightsaber. It’s like having a sports team where one phenomenal player does all the work, and the others are mostly there to meet the minimum number of players, and to explode hilariously.

Force powers are admittedly a bit disappointing except at the highest levels. Force Jump no longer catapults you into a low ceiling, shattering your skull; rather, it makes you jump higher and stay in the air longer than normal. OK, fine, be functional. At first, Force Push is more like Force Sorry I Bumped Into You, and then suddenly you’re powerful enough to knock a whole squadron of Stormtroopers into a bottomless abyss, thus replacing lightsaber combat entirely (much to the chagrin of multiplayer gamers everywhere). Force Tickle turns into a Palpatine-worthy Force Lightning a little sooner, but the point remains that there’s not much force in your Force until the late-game single-player missions, or until you play a high-powered multiplayer match (which is what you’ll probably be doing anyhow).

I sulk in a corner sometimes knowing that multiplayer has additional powers such as Force Absorb that would be useful even in the early stages of single player. I sulk harder when I think about how JKII abandoned the “choose your own Force power progression” model of JKI and MotS, leaving you with absolutely no say about how or when your Force powers improve. The element of character customization is not on JKII‘s periodic table.

The one benefit here is that there are more Zelda-esque puzzles centered around Force powers you’re guaranteed to have, assuming you like Zelda or esques. Force-based or not, some of the challenges are pleasantly clever (extensive use of Push, Pull, Jump, and Speed to recover your lightsaber from a training course), while some are frustrating or tedious even after you know what to do (escorting a droid across a—wait; “escorting a droid” pretty much explains itself).

Still, it’s clear that a lot of thought went into the level design for both single and multiplayer—even the not-so-fun areas feel like someone thought they’d be fun. Despite missing the mark with a Force-enhanced stealth mission, a zero-gravity escape from an exploding starship, a canyon romp in a popular Star Wars vehicle, and one particular boss battle that was barely a good idea in the first place, JKII gets it right with the sieges of two popular Star Wars locations, an all-out bar fight, sniper rifle showdowns, clever ambushes by lightsaber-toting foes, and a button that sucks unsuspecting Stormtroopers out an airlock.

Granted, everything I just mentioned was an example from the single-player campaign, but that’s only because no one I have ever met will admit to owning any of the multiplayer PC games I have. Fortunately, brain-damaged AI opponents are a perfect replacement for friends, so I’ve enjoyed countless hours of free-for-all deathmatches, team combat, one-on-one duels, and ow stop hitting me I didn’t mean what I said about brain-damaged AI.

JKII multiplayer is a fun waste of time for me, and that pretty much sums up my thoughts about an entire mode that is the sole reason some people play the game. Evidently I like JKII‘s muliplayer enough to have created a few custom levels, which you can download for free. [Donations will not be turned away, though.] Most of them are too high-concept for a first attempt at designing 3D levels, but I’m still very pleased with how I’ve suddenly turned this review into shameless self-promotion.

That’s the real beauty of Jedi Knight II: the game was built with user-generated content in mind. There’s a “Mods” option on the main menu that lets you easily load up completely different gameplay modes, and adding new levels and character models to multiplayer is easier than juggling hamburgers in a bumper car.

Even the built-in cheat codes offer significant replay value and customizability for the oft-neglected single-player mode. You can change your saber color, activate “realistic” saber dismemberment (remember Fall Apart Rabbit?), enable sleek new lightsaber combat styles that previously existed only in your imagination, and max out your Force powers to level 5 (when they normally don’t get any farther than level 3, like me when playing Contra). This is an exceedingly rare thing for me to say, but cheat codes unlock the true fun potential of the game, regardless of difficulty level or player skill. Combined with the game’s receptiveness to the wealth of user-generated content available, that’s enough reason for my opinion of Jedi Knight II to go up an entire point on our arbitrary rating scale.

While Jedi Knight II‘s graphics, lightsaber combat, cheat codes, multiplayer experience, and potential replayability are Force Leaps and Force Bounds ahead of the game’s predecessors, the fun factor of the single-player campaign fluctuates too much—even when talking about how much I like the game, I can’t help but mention or consciously avoid discussing a few of the places that are disappointing or outright unpleasant. But hey, look, Lando Calrissian.