NETHACK: LEGACY is a remastered version of the original NetHack, the deeply rich and complex fantasy D&D roguelike. Hack and slash your way through orcs, dragons, and cockatrices as you explore the perilous Mazes of Menace seeking the Amulet of Yendor! Choose one of 13 different classes to dive through the procedurally generated dungeon in this. NetHack: Legacy The classic rogue-like, remastered. Learn more; Buy.

NetHack: Legacy follows on from it's older brother with the aim to make NetHack a bit more modern and accessible.

Personally, I've never actually played NetHack, so I'm not honestly too sure on why it needed a remaster. I also find it quite odd that a game with ASCII graphics is being remastered with the style of an old CRT screen.

I will let the developer do the talking for that, here's what they said:

The original NetHack has been in development since at least 1987, and is still in active development today. However, enjoying the game in its original ASCII interface is somewhat complicated for those unfamiliar with command prompts and UNIX tools/methodologies. The game was simply designed for programmers, by programmers, and getting everything setup correctly called for at least a vague familiarity with the field. NetHack: Legacy branched the open source project in late 2017 to make fairly substantial changes to the codebase for a more friendly user experience and more streamlined platform support.

The goal of NetHack: Legacy is to make NetHack more accessible to modern gamers on modern machines, involving many architectural changes which are, unfortunately, incompatible with some of NetHack's many target operating systems. Thus, NetHack: Legacy chose to fork so that both projects could fulfill their respective goals and visions. However, the core game logic is compatible between the two projects, so both can benefit from many of the improvements and enhancements made by one another, as both projects are open source under the NetHack General Public License.

Since NetHack itself is open source, NetHack: Legacy will be as well. Although the source link on their official site doesn't actually contain the source code right now. I assume it will be when the game actually releases.

Here's what the developer says it will feature: Aragami.

If you're interested in playing a classic old-school rogulike that runs straight out of the box and has a manageable interface despite its ASCII visuals, then you may want to check out NetHack: Legacy on Steam.
Developed by FrozenCrate, this remastered version of the original NetHack will set you back $5.99 or your regional equivalent and in return let you play the complex D&D-inspired roguelike RPG on your modern system without any hassle. Check out the official gameplay trailer:

And the game's description: 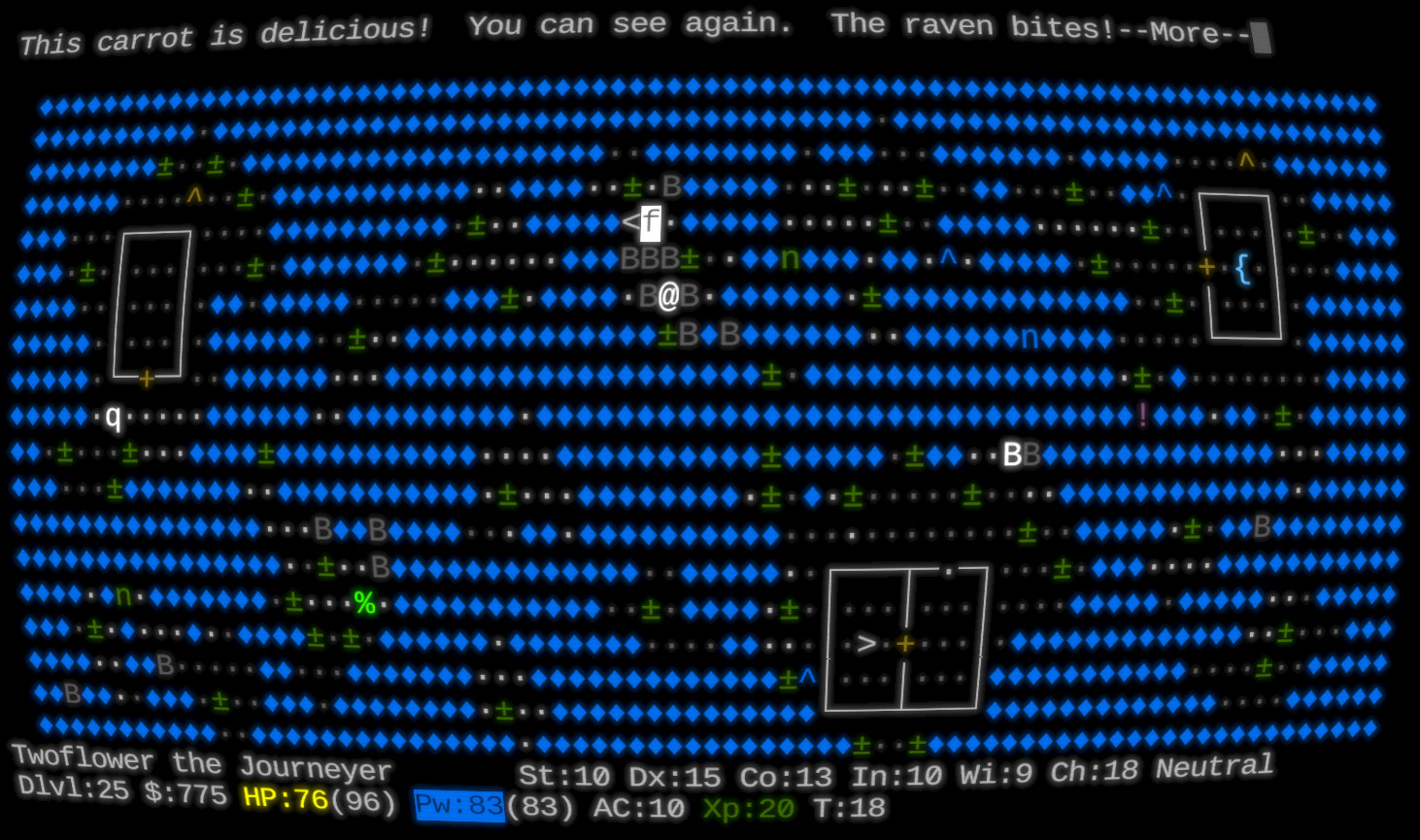 NETHACK: LEGACY is a remastered version of the original NetHack, the deeply rich and complex fantasy D&D roguelike. Hack and slash your way through orcs, dragons, and cockatrices as you explore the perilous Mazes of Menace seeking the Amulet of Yendor! Choose one of 13 different classes to dive through the procedurally generated dungeon in this hardcore, turn-based, roguelike adventure.
Experience unforgettable moments in the deeply immersive world of NetHack, where armor rusts from getting wet, scrolls burn from catching on fire, and bright flashes of light temporarily blind you. But the immersion goes both ways: grease your armor so the water rolls off, place your scrolls in a fireproof bag to protect them, wear a blindfold to protect your eyes! The intricate interplay between mechanics has been in development for over 30 years, well earning the credo, 'The DevTeam Thinks of Everything.' Experience for yourself the remastered version of this highly influential piece of gaming history.
Improved Classic Interface
Play the illustrious ASCII interface without having to endlessly tweak terminal settings and config files. Beautiful look and feel out of the box, with improved mouse support and default keybindings.
Retro-modern Special Effects
Experience the warm glow and feel of an old CRT monitor, but with a modern spin like clean, resolution-independent fonts and RGB colors.
Replay System
Re-watch previously played games with the fully integrated replay system, allowing real-time playback, rewind, fast-forward, and jumping.
Full Game Manual
Like the games of old, a nice beefy manual to sink your teeth into as you enjoy the new-box smell.