Darkest Dungeon's soundtrack is an integral component of its dark fantasy atmosphere. It was composed by Stuart Chatwood.

Album art for the game's soundtrack.

In addition to being present in the main menu and Hamlet, the soundtrack accompanies the player throughout the dungeons, varying between combat and exploration and being dynamically modified by effect of the light meter, such as by including several creepy ambient sounds when in the darkness, varying depending on the location. The Sirenboss will also sing along to the background music. The official Darkest Dungeon soundtrack is available for purchase on the Steam store as a DLC. Upon purchasing and downloading, the full album inclusive of front cover art will be located under SteamAppsCommonDarkestDungeonsoundtrack inside the user's Steam library.

Retrieved from 'https://darkestdungeon.gamepedia.com/Soundtrack?oldid=41962'
This article is a stub. You can help Darkest Dungeon Wiki by expanding it.
Poster art for the Crimson Court release by Leesha

Here are the list of features included in The Crimson Court:

Promotional art for The Crimson Court 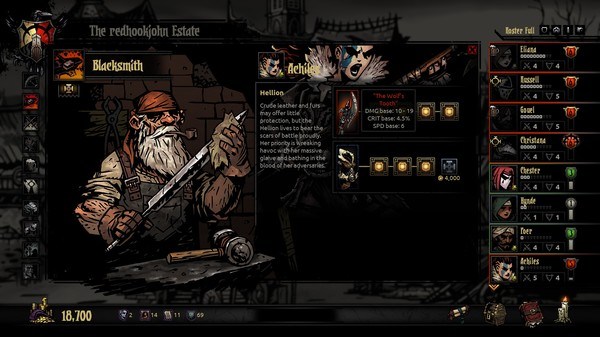