We’ve entered full production now on the excitingly gruesome new injury mechanics and will be revealing them to you next week in a detailed blog post. For now, we give the word to our talented musicians to listen to and hear their thoughts on the most recent additions to the soundtrack of Battle Brothers.

One of the two new Barbarians battle tracks from the official soundtrack to Overhype Studios' 'Battle Brothers - Warriors of the North DLC', composed by Brea. Blues Brothers 2000 (1998) cast and crew credits, including actors, actresses, directors, writers and more.

A selection of themes we made for the soundtrack of Overhype Studio's turn-based-strategy/rpg hybrid 'Battle Brothers'. The full two-hour album is now on Bandcamp where you can stream or get it in lossless quality: breakdownepiphanies.bandcamp.com/album/baundtrack.

Hi everybody, Patrick from Breakdown Epiphanies here. Over the course of the last weeks we added some new tracks to the Battle Brothers soundtrack, a few of which we would like to showcase in this week’s devblog.

So without further ado we’ll start with the latest piece in our musical arsenal, the third theme for battles against the notorious orcs that are haunting every late-game mercenary company’s dreams. We’ve started naming the tracks for the soundtrack inspired by names and places from the game now, so instead of the rather bland “Battle Track III”, we give you “The Might of Obrokk”.

At the start, our goal was to have two fairly long and varied themes for battles with each faction in the game. This third Orc track we did mostly for fun, although you can say that the Orcs pose a prevalent threat in the late game so more music that carries the weight of fighting these armored behemoths will be a welcome addition.

We’ve been listening to Howard Shore’s beautiful and brilliant soundtrack to the LOTR-movies a lot lately and we always loved Shore’s take on Tolkien’s world. So we had to have a go at an orchestration in his style while trying out some awesome new instruments we got our hands on. Like with all of the Orc music for Battle Brothers, we’re relying mostly on brass in our arrangement, accompanied by odd rhythm patterns that feature somber and tuned percussion, as well as hammering on all kinds of metal surfaces. All of this culminates in a more harmonic but still menacing ending with a big choir build-up. If at that point Obrokk has not wiped the floor with your puny mercenaries, and somehow you managed to survive, feel free to loot some juicy man-splitters off of those greenskin corpses, as the approaching reinforcements sound their war horns in the distance. 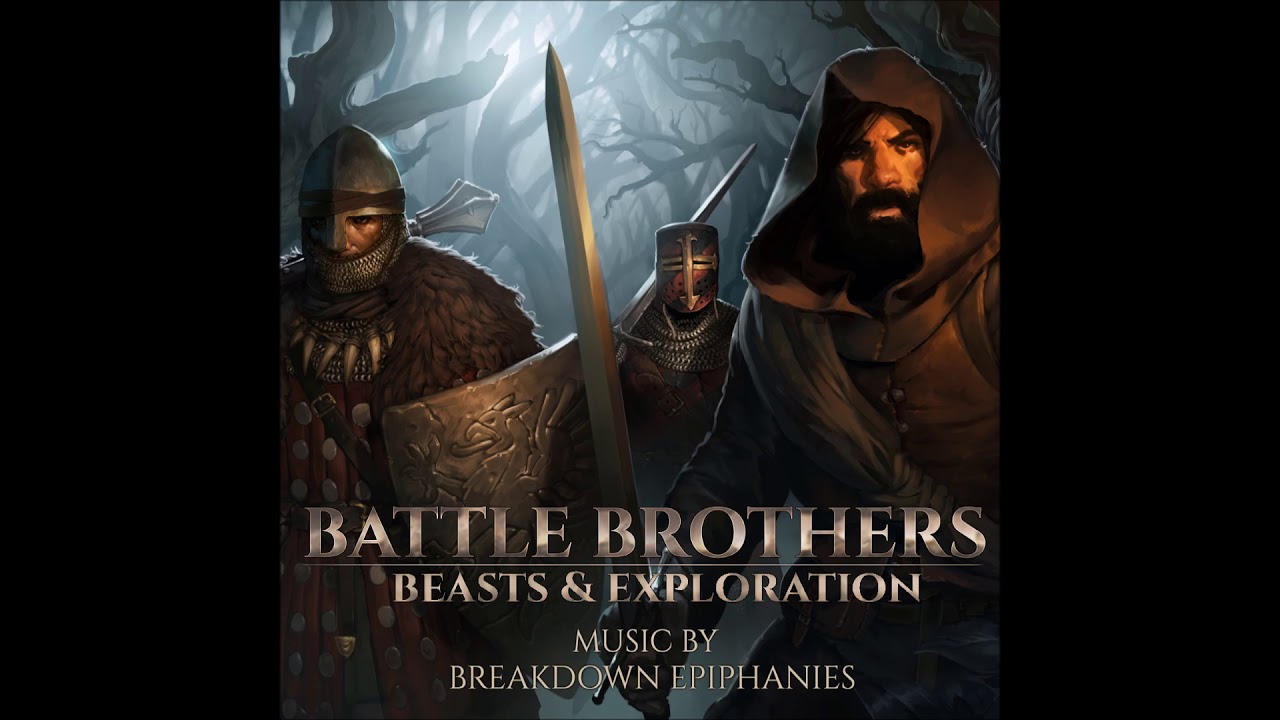 A few weeks earlier the guys from Overhype asked us for another track that could be played when travelling on the world map. Although we already wrote a bunch of music for this part of the game, some more variety was needed, given how much time players spend getting from town to town and looking for work for their company. Overhype have a lot of stuff planned that will incentivise exploring even further to make this part of gameplay stronger for the final release, so providing more music for the world map is also setting up for these improvements.

“Traversing the Northern Clanlands” starts out with a very mellow and soothing string arrangement that won’t get in the way when quickly hopping on to the world map screen and e.g. back to a city. After the first part though it transitions to a wide and epic theme that evokes (so we hope) a feeling of wandering and exploration (I’d say riding across the countryside but you all know that we are not very keen on horses around here ^^).

Rise and Fall of House Kaltenborn

Lastly we would like to present a piece that has been in the game for quite some time now but that many of you might not have encountered up until now because battling the forces of the various noble houses still needs a rather complicated setup at the moment. This will change when faction warfare becomes a thing, but until then, feel free to have a listen to the first Noble Houses Battle Track here.

All of the tracks related to the human faction in the game (bandit themes, town- and stronghold themes) feature acoustic guitars in some way and so does the music for battling the noble houses. Other than that, given the tone of Battle Brothers we could not help ourselves but think about Ramin Djawadi’s main theme for GOT and came up with a waltz in 6/8 (much like our “Stronghold Theme”) that uses a similar call-and-answer structure between a solo cello and the rest of the string section. Later, there are more strings, lots of brass and choir. We basically pulled out all the stops on this one, and its project in our audio workstation is a good contester for “most-notes-played per minute” in the soundtrack.

So what’s on the horizon? Next up is a second track for the beast faction that is already in the works. It will feature almost exclusively drums and percussion (those direwolves still having problems to play melody instruments with their clumsy paws) and will be a bit more up-tempo and dramatic than the first theme that was more about setting a dark and threatening atmosphere. After that we’ll tackle the second noble houses theme so we’ll have that ready for when faction warfare is being introduced. There might be some more new content that will need some musical accompaniment until the final release (like locations or events).

Anyhow, we will probably sit down and write a few more tracks in the meantime just because it’s a lot of fun, like we did with the latest orc song. Boy, are we lucky to work on this game ;)

With our Steam Greenlight campaign still running and us busy working on the strategic worldmap, this week we’ll get some insight into how music is created for Battle Brothers and how it helps to shape the experience of playing the game. 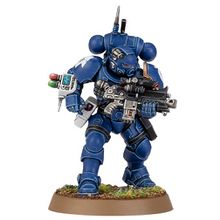 We’ll give the floor to Dennis and Patrick, our talented musicians from Breakdown Epiphanies, who will give you a tour of the music in Battle Brothers in their own words and even reveal several brand new tracks for you to listen to. If you want to be always up to date regarding new tracks for Battle Brothers, you can also follow them on Soundcloud or Twitter. But for now, let’s listen in.

Hi there! Today we, Dennis and Patrick from Breakdown Epiphanies, get the opportunity to talk about our musical background and give you a little insight on the music we’ve been writing for Battle Brothers. On top of that we’re happy to share some new tracks that offer a first impression of the games’ upcoming features like the strategic world map, the Orc faction and villages. Bioshock infinite.

We have been making music together for more than ten years now, mostly in rock/hardcore bands but we always experimented with more electronic sounds and production on the side. The other thing we did a lot of since our childhood was playing video games. We share dear memories of some themes from games like Terranigma, Secret of Mana, Unreal or Shining Force.

Early this year we decided that it was time for a leap of faith, to put us out there and talk to game developers all around the web. Luckily, we ended up meeting the awesome guys from Overhype Studios who not only work on an incredibly promising game but also live (for the most part) in our hometown, Hamburg. Battle Brothers immediately struck a nerve with us due to its charming art style and its reminiscence of the old X-Com and Jagged Alliance games. So we stacked up on new digital instruments, orchestra- and scoring libraries, started learning about orchestration and began composing.

As Battle Brothers’ gameplay revolves mostly around desperate battles to the (perma-)death, the soundtrack has to convey a sense of danger and tension. So the general mood we aimed for was reasonably dark while still evoking a notion of adventure and exploration. The first thing we came up with ended up to be the main menu theme which already points in this general direction.

At the moment, the guys from Overhype are working overtime on the game’s strategic world map layer so we are happy to present our first track for this slice of gameplay. We really wanted to emphasize the feeling of exploration and discovery on this one. The player should immediately recognize this as a part of the game that has its own pacing and set of choices. For the sake of continuity the harp used in the menu theme plays a role in this one, too, starting out with a short, memorable cue that can be identified with changing screens to the world map.

We plan on having several tracks playing in this section of the game, so certain themes can be put out of or added to the rotation depending on the players progress, i.e. the music will become more dramatic and sombre as the threat of the “Greater Evil” conquering the lands becomes more imminent.

The music accompanying tactical combat has to be a totally different beast. Players will have to focus and concentrate on small decisions over a long period of time and the soundtrack isn’t supposed to dominate the experience and to distract from the core-gameplay. Nevertheless battles are supposed to feel tense and hazardous and each faction will have it’s identity reflected in the choice of instrumentation and style.

Regarding the Orc faction we had a lot of established tropes to play around with: Orcs are perceived as chaotic, fierce, almost savage-like opponents, yet they usually maintain a sort of military hierarchy. Our track ended up being a mix of soundscape and score, dominated by menacing drums but interrupted by swift tribal percussion. Generally we went with a lot of low end on this one, from the staccato celli and upright basses to deep drone-sounds and a (hopefully memorable) brass cue.

Last, but not least, you can have a listen to the first village theme. It will play in the background as our fellow Battle Brothers stack up on equipment and hire new recruits. We grabbed our guitar for this one and came up with a classical medieval sounding finger picking piece. The time that players spend in villages and towns will hopefully be a welcome opportunity to relax between all those deadly battles:

We hope you enjoy the tunes! If you want to be kept in the loop regarding new tracks for Battle Brothers, follow us on Soundcloud or Twitter. We’ll be regularly sharing our new compositions up to the game’s release.