The Alien, often referred to as 'the creature' during the game, is the primary threat to Alien: Isolation's protagonist, Amanda Ripley, throughout the game.

This section contains SPOILERS for the plot of Alien: Isolation. Proceed at your own risk.

The Alien is approximately three metres in height. Though generally humanoid, both its head and feet are disproportionately extended (the ankle serves as a digitigrade knee); a long, spike tipped tail also extends from the base of its spine; four tubes sprout from its back (two on each side of the spine) and pad-like growths sprout from above the shoulders. Its outer teguement - whether skin or exoskeleton - is either black or dark grey (possibly with brown tones).

The casing around its upper head is translucent; in the right lighting, cranial details - including what appear to be empty eye sockets above its mouth - can be glimpsed. The mouth itself contains a set of metallic teeth; it contains a long, cylindrical tongue tipped with a second set of toothed jaws. The creature drools significant amounts of a clear, viscous substance from its mouth.

The Alien exhibits little of what a human being would consider a personality. Its observable behaviour centres around the killing of all it encounters. Anecdotal evidence from employee logs scattered about Sevastopol also suggests that the Alien may be abducting people. It makes no attempt to communicate with any human beings on board the station and appears to disregard the presence of Sevastopol's complement of Working Joe synthetics (though the discovery of dismembered synthetics would indicate that the Alien will employ hostility toward them in certain circumstances).

Verbal communication is limited to a collection of hisses (a general gasping grunt and a loud his when it detects the immediate presence of prey), grunts (including what seems to be a noise of frustration) and screams (including a hunting yell when it sights prey and closes in for the kill, and what may be a distress noise when attacked with fire).

Though not ponderous, the Alien does little to conceal the noise of its movement. Its footsteps are loud and its movements within ducts and vents are audible to any in the immediate vicinity. It only moves quickly when approaching sighted prey, traversing Sevastopol's ducts or escaping immediate danger, otherwise prowling or stalking its environs. Its powerful legs allow it to leap into overhead vents with ease.

The Alien's preferred method of killing its victims is with its tongue; it often grips the heads of human victims in its hands, then opens its mouth and deploys its tongue with considerable speed and force, puncturing the victim's skull and killing it almost instantly. The Alien also strikes from behind with its tail, piercing the victim's abdomen.

The Alien seems to be structurally perfect, capable of withstanding hostile environments up to and including vacuum. Revolvers and shotguns do no damage to the Alien; the noise of their firing often serves to attract it.

Though it does not seem to do the creature any actual damage, the Alien reacts defensively to fire. When confronted with a flamethrower held at the ready, the Alien may (but will not always) pause in its advance; when doused in flame from the flamethrower, it may (but will not always) retreat to the closest vent. A Molotov has more success in giving the Alien pause or driving it off, but the weapon's potential for splash-back damage at close range makes its deployment a risk also.

The team developing Alien: Isolation set themselves an objective to recreate H. R. Giger's design and physical realisation of the original Alien as closely as possible. As such, the model and skin of the game's Alien appears very similar to its appearance in the movie Alien.

The team made some compromises due to the nature of the game. The player had control over the game's camera and could potentially observe the Alien from any angle (and would often be observing it from a crouched position). Also, the team needed to visually communicate the Alien's ability to move at speed on foot.

As such, they changed the design of the Alien's legs - originally humanoid in shape and jointing due to the Alien suit being worn by a human being - by extending the feet and turning them into the lower third of the leg (the actual feet are the equivalent to the toes and ball of a human foot). This served to give the Alien a more predatory gait and pose and also allow the player to clearly differentiate between the Alien and a human or android while crouched under a desk or bed, or within a cupboard.

Another goal of the design team was to avoid an issue seen in other survival horror games: computerised opponents with fixed routines that players could learn and counteract, robbing those opponents of any reason for the player to fear them. The team wanted players to never have reason to not fear the Alien.

To achieve this goal, they designed the Alien's behaviour with a minimum of 'scripted,' or pre-determined event-based, behaviour. The Alien's 'artificial intelligence' is intended to be constantly seeking the player (or any other potential human targets in the area of play) through its senses.

The behavioural routines are sophisticated enough to give the Alien the appearance of learning from the player; it will track its history and what it has experienced, unlocking pre-programmed behaviours once certain thresholds are met. For example: If the player deploys a noisemaker as a decoy enough times (i.e the Alien investigates the noise and finds only the device), the Alien may start disregarding it or even seeking the player in the direction that the noisemaker was thrown from.

It also does not follow pre-planned 'patrol paths', instead evaluating data from its senses to determine where the player is or is not and moving via corridors or vents to where it has the best chance of finding prey. It will not only follow up on significant noises but also double-back and re-check areas it has just left if the information available to it indicates the player may have actually been hiding there.

This section contains SPOILERS for the plot of Alien: Isolation. Proceed at your own risk.

The Alien was brought on board Sevastopol Station by the crew of the Anesidora. Upon discovering the Nostromo's flight recorder in the vicinity of Zeta Reticula, the ship's captain, Marlow, decided to retrace the Nostromo's course prior to its destruction. The crew discovered the acoustical beacon that the Nostromo had intercepted, leading them to the planetoid and the derelict alien spacecraft present on it.

While the crew explored the derelict vessel's cavernous lower deck, an alien parasite emerged from a leathery object and attached itself to Marlow's crew member and wife, Foster. The crew departed the planet and made for Sevastopol, persuading Marshal Waits to forego quarantine with the potential value of The Nostromo's flight recorder in order to get Foster into the Sevastopol's hospital.

Some time later, the parasite detached itself from Foster, but a short while later, the embryo it had implanted within the woman emerged, killing her. The immature creature rapidly grew and began preying on the Sevastopol's population, killing some and abducting others, particularly in the station's Engineering decks. Word of the creature's presence spreads but the general populace, already fighting over the station's limited remaining resources, pay it little heed.

Shortly after Amanda Ripley's arrival on Sevastopol, the Alien kills a citizen named Axel, who has just told her about the monstrous killer loose aboard the station (although he himself has not seen the creature), in front of her. It continues its mission of murder and abduction, though Ripley herself manages to escape its clutches repeatedly.

The creature meets its end when Ripley lures it into a lab module which Marshal Waits then ejects into the gas giant that the station orbits. Warlock 2: spectacular spell pack download free.

But Amanda soon discovers the results of its activities: A massive nest beneath the Sevastopol's reactors which houses the cocooned captives of the Alien (many already dead after birthing more embryos) and several more eggs. Her purpose in destroying the nest by overloading the reactors means that Ripley doesn't uncover the source of the eggs, but one thing is clear to her: There is more than one Alien on Sevastopol.

Although Ripley succeeds in triggering the purge and destroying the nest, several Aliens escape, harrying her in her efforts to evacuate the station aboard The Torrens. One manages to capture her in an airlock just as she is about to leave, taking her to a fresh nest nearby. She awakens and escapes before a parasite can attach itself to her, but encounters three Aliens on the exterior of the docking claw holding the Torrens. Narrowly escaping them by triggering the claw's release override, Ripley boards The Torrens as Sevastopol Station plunges into the gas giant it orbits, killing any lifeforms remaining on board.

However, Ripley discovers that an Alien has also boarded The Torrens somehow, presumably killing its crew. It pursues Ripley into one of the ship's airlocks, which she triggers.

The fate of this last Alien is unknown.

The Alien has, of course, appeared in six feature films and other media. While this article focuses on its appearance in Alien: Isolation (and, to a lesser extent, the film Alien), it is worth mentioning some aspects of its other apperances. 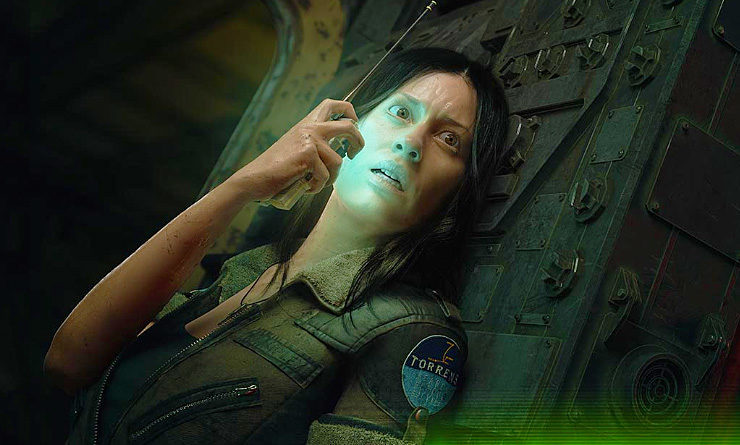 The Xenomorph or a xenomorph?[editedit source]

Outside the immediate bounds of the movie Alien and the game Alien: Isolation, the Alien is often identified both as a species and as individual members as a 'xenomorph' (Translation from Greek: 'foreign form' or 'strange shape'). This arises from the movie Aliens™, when the character of Lt. Gorman uses the word during a briefing of his Marine platoon prior to the drop on LV-426 (Ellen Ripley also uses the term in footage cut from the film Alien3™, later restored in that film's Assembly Cut in 2003).

Given the context of the briefing and the established ignorance by humanity at large of the Alien itself, though, this term was more likely used to identify a broader range of catalogued non-terrestrial lifeforms, probably non-intelligent and only semi-dangerous fauna (hence Hudson and Hicks' dismissal of the mission as a 'bug hunt').

However, possibly due to the uniqueness of the term to the Alien franchise, 'xenomorph' rapidly came to be synonymous with the Alien itself and has seen use in multiple tie-in works. Most recently an Alien tie-in novel, Alien: Out of the Shadows, establishes that the species has been categorized 'Xenomorph XX121.'

Though the Alien is certainly a xenomorph species by that definition, the fact that it's never even heard in the theatrical cuts of the movies before or after Gorman's brief utterance implies that the Alien is something foreign to even that classification.

As the term does not appear during the course of Alien: Isolation, and all discussion of the creature in The Creative Assembly's press and marketing material refers to it as 'the Alien,' this page refers to the creature as such.