One of the most famous heroes of mythology is Hercules, the demi-god son of Zeus who performs impossible tasks and slays unstoppable beasts. Now his legend comes to life in a new story, reworked to bring a new twist to the popular tale. Hercules is the son of Zeus, raised by mortals to live a human life. 12 Labours of Hercules XI: Painted Adventure Help Emma, the young artist from the 21st century, settle her troubles with Greek gods, prepare Hercules for the contest and save Megara!

Hercules is arguably the most famous demi-god of Greek mythology. He and his deeds are represented in art, literature, and film over the centuries. His deeds were even cataloged in a comic book in the 1950s and dozens of films have been made in the last 100 years depicting his quests.

Although much more myth than man, several dynasties, such as the royal houses of Sparta in ancient Greece and the Argeads of Macedonia, claimed to descend from Hercules. According to the parable, “The Choice of Heracles”, when Hercules was young he was visited by two nymphs—Pleasure and Virtue—who offered him a choice between a pleasant and easy life, or a severe but glorious life: he chose the glory.

The twelve labors of Hercules (Heracles is Greek mythology), also known as the dodekathlon, are how Hercules gained much of his mythological fame as a demi-god. Those twelve labors took him around the known world, performing impossible tasks that no one but the son of Zeus could have ever completed. But the twelve labors were not active acts of fame seeking. They were, in fact, his penance for killing his wife Megara and six children after being driven mad by the goddess Hera, wife of Zeus and Hercules’ father. Hera had one before unsuccessfully tried to kill Hercules, proof of her husband’s infidelity, when he was 8 months old by sending two snakes to poison him. Hercules strangled them in his crib, saving both his own life and the life of his twin brother Iphicles (whose father was a mortal, the husband of Hercules’ mother whom Zeus seduced.)

After regaining his sanity Hercules went to the oracle at Delphi to learn how he could atone for his actions. The oracle commanded Hercules to serve King Eurystheus of Tyrins for twelve years. In return for his service, Hercules would be rewarded with immortality.

During his time working for King Eurystheus, Hercules initially performed ten labors, but after completing them, Eurythesus declared he had cheated on two of them by getting help from others and added two more, resulting in the final Twelve Labors of Heracles.

A traditional order of the labors found in the Bibliotheca, a compendium of myths and heroic legends from the first and second century AD, includes Hercules’s successful attempts to:

The twelve labors are only the beginning of a very impressive list of deeds and tales that Hercules completed over his life. He also traveled with Jason and the Argonauts in search of the Golden Fleece, was tricked into holding up the world by Atlas, freed the titan Prometheus from his bonds (bound by Zeus for giving fire to man), and more.

Hercules performed twelve labors given to him by King Eurystheus of Tiryns. For twelve years, he traveled all over to complete these incredible tasks. NOTE: Because different ancient poets gave their own accounts of Hercules's labors, some details may vary.

One: Kill the Nemean Lion

This monster of a lion had a hide was so tough that no arrow could pierce it. Hercules stunned the beast with his olive-wood club and then strangled it with his bare hands. It is said that he skinned the lion, using the lion's sharp claws, and ever after wore its hide.

The evil, snakelike Hydra had nine heads. If one got hurt, two would grow in its place. But Hercules quickly sliced off the heads, while his charioteer, Iolaus, sealed the wounds with a torch. Hercules made his arrows poisonous by dipping them in the Hydra's blood.

The goddess Artemis loved and protected this stubborn little deer, which had gold horns. Hercules found it a challenge to capture the delicate hind without hurting it (and making Artemis angry). After following the hind for an entire year, he safely carried it away. The people of Mount Erymanthus lived in fear of this deadly animal. Hercules chased the wild boar up the mountain and into a snowdrift. He then took it in a net and brought it to King Eurystheus, who was so frightened of the beast that he hid in a huge bronze jar.

Think you have what it takes?

Show off your mythology knowledge with our quiz on the gods of Olympus.

Thousands of cows lived in these stables belonging to King Augeas. They had not been cleaned in 30 years, but Hercules was told to clean them completely in a single day. To do so he made two rivers bend so that they flowed into the stables, sweeping out the filth.

These murderous birds lived around Lake Stymphalos. Their claws and beaks were sharp as metal and their feathers flew like darts. Hercules scared them out of their nests with a rattle and then killed them with the poison arrows he had made from the Hydra's blood.

This savage bull, kept by King Minos of Crete, was said to be insane and breathe fire. Blasphemous game. Hercules wrestled the mad beast to the ground and brought it back to King Eurystheus. Unfortunately, the king set it free, and it roamed Greece, causing terror wherever it went.

Eight: Capture the Horses of Diomedes

King Diomedes, leader of the Bistones, fed his bloodthirsty horses on human flesh. Hercules and his men fought and killed King Diomedes and fed the king to his horses. This made the horses tame, so that Hercules was able to lead them to King Eurystheus. 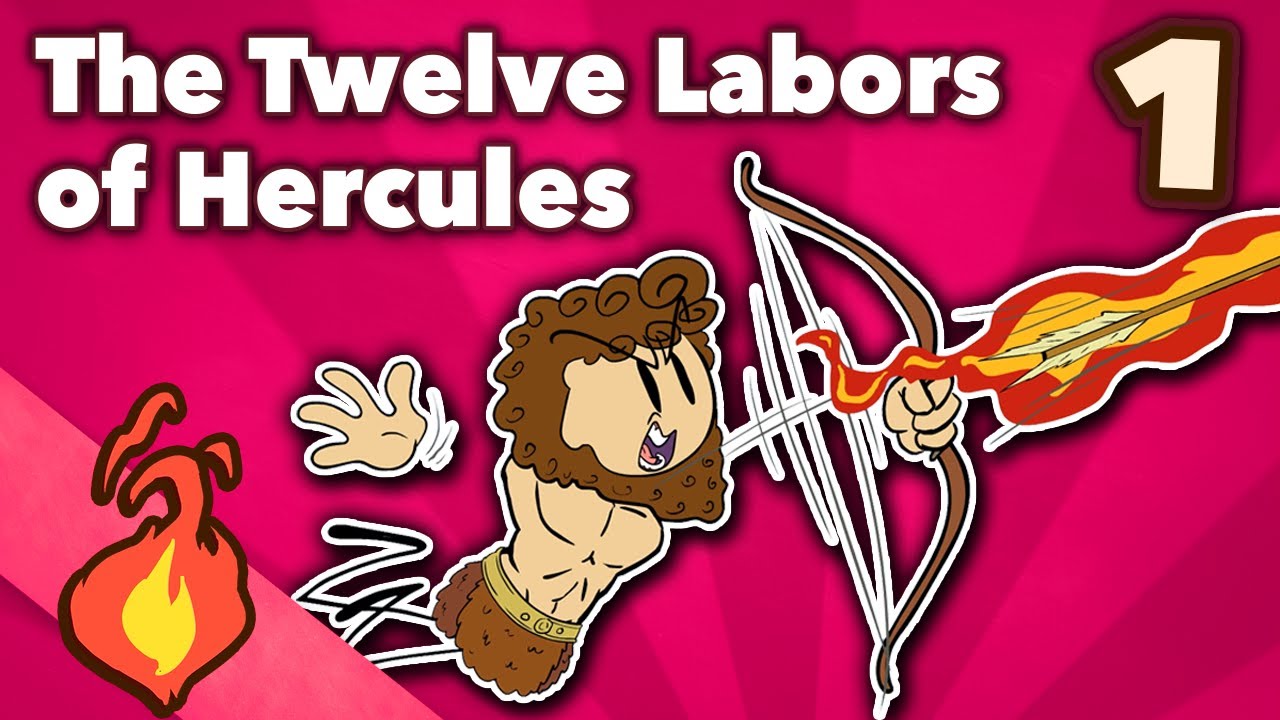 Nine: Take the Girdle of the Amazon Queen Hippolyte

Hercules went to the land of the Amazons, where the queen welcomed him and agreed to give him her girdle for Eurystheus's daughter. But Hera spread the rumor that Hercules came as an enemy. In the end he had to conquer the Amazons and steal the golden belt.

Ten: Capture the Cattle of Geryon

Geryon, a winged monster with three human bodies, had a herd of beautiful red cattle. He guarded his prized herd with the help of a giant and a vicious two-headed dog. Hercules killed Geryon, the giant, and the dog and brought the cattle to King Eurystheus.

Eleven: Take the Golden Apples of the Hesperides

The Hesperides were nymphs. In their garden grew golden apples protected by Ladon, a dragon with a hundred heads. Hercules struck a bargain with Atlas, who held up the earth. Hercules shouldered the earth while Atlas, the nymphs' father, fetched the apples.

Hercules was ordered to capture Cerberus, the three-headed guard dog of the underworld, without using weapons. Hercules wrestled down the dog's wild heads, and it agreed to go with him to King Eurystheus. Cerberus was soon returned unharmed to the underworld.